‘A MORE PERFECT UNION’ IS TOPIC FOR SPEECH CONTEST

St. Paul —The second biennial Speaking Proudly oratory competition will give Minnesota high school girls an opportunity to speak persuasively about the topic, “A More Perfect Union, Rising to the Challenge.” Scheduled for Saturday, Oct. 23, at the State Capitol, the competition offers finalist prizes of $1,500, $1,000 and $500.

“We want to encourage girls to develop and express their own opinions about topics of importance to the country,” competition’s spokeswoman Sherie Wallace stated in a news release. “This is always central to education and crucial at a time when the cancel culture stifles students’ ability to speak freely and independently.”

The competition is open to all girls in grades nine through 12 who reside or attend school in Minnesota, whether they are homeschooled or attend public, private, charter or other types of schools. More information and an application form are available at speakingproudly.org.

Bemidji Pioneer, Oct. 1, 2020
BEMIDJI — A local group of women recently formed what they have entitled the “North Central Minnesota Republican Women” to serve the Bemidji area and all north central Minnesota.

According to a recent release, they are partnering with nine other Minnesota Clubs of the National Federation of Republican Women. Their purpose is “to lead to better government policy as we work within the party to promote freedom, equality and justice,” the release said.

The organization’s first meeting was held on Sept. 22, with guest speaker Minnesota Federation of Republican Women’s President and former Minnesota State Legislator, Kathy Tingelstad, who affirmed to the attendees, the Federation’s mission, vision and commitments to Republican women locally, regionally and nationally, the release said. During the meeting, the group also created memberships and elected officers.

Subsequent monthly meetings will be held on the third Thursday of each month. 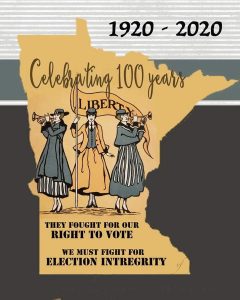 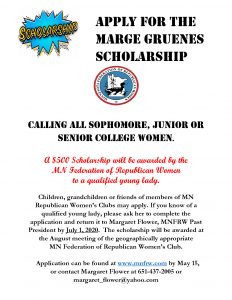 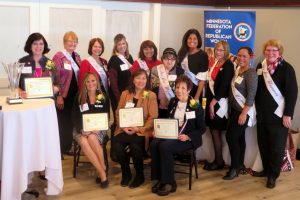