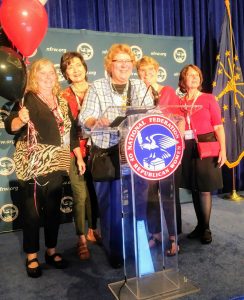 Minnesota won a most impressive Campaign Volunteer Award for logging a total of 119,532 hours of volunteer time to the benefit of the Republican party, Republican candidates, or the NFRW over the last 2 years! In the category of states with 1-9 clubs, Minnesota is the leader! Congratulations to the MNFRW!

“The other four MN Delegates and I were honored to represent the nearly 300 members of the MN Federation of Republican Women (MNFRW) at this National Convention,” said Kathy Tingelstad, State President of the MNFRW. “Our MN Members volunteer TRIPLED the average number of hours per person, compared to Members in other states,” she added, “That’s impressive!”

More than 400 awards were given to clubs which demonstrated excellence in several key areas.

“We are very pleased that one-third of our clubs, representing 40 states, earned an NFRW Achievement Award this biennium,” Smith said. “It is the culmination of two years of diligent planning and hard work on the part of these club members, and we are proud to honor their efforts.”

Founded in 1938, the National Federation of Republican Women is the largest and most influential Republican women’s group in the nation, proudly representing the party that first made it possible for women to vote in the U.S. The NFRW works to increase the effectiveness and relevance of women in the cause of good government. Our mission remains to recruit and elect Republican candidates, promote the principles of the Republican Party, educate the public, and inform the media.